I'm trying to put together a gossip girl playlist (maybe more focused on chuck and blair songs).  Does anyone have recommendations?

For those of you interested Serena/Blair is losing to Wonder Woman/Batwoman, go vote!!

→ tv shows. greek, what i like about you
2 graphics

Sign-up opens : March 15
Posting begins : April 1
And ends : August 31
Hey Gossip Girl Fans,
I am currently enrolled in an anthropology class (3110) called research methods and I am doing a research paper on gossip girl. My research paper seeks to examine the perceptions of representation of femininity in “Gossip Girl,” and its relation with contemporary discourses of femininity, and consumption habits in young women. I specifically chose to interview females aged between 18 to 24 as this age group often deals with sexual exploration, and identification, which is also a common theme presented throughout, "Gossip Girl".

I need to have people fill in a questionnaire/survey or if anyone is willing to do a Skype interview. It would be greatly appreciated if anyone would be able to help me out. I have a consent form and everything is legitimate (which you will get a copy of too), with contact information to my professor.

RULES:
+ Credit Required!
+ No Altering of ANY Kind!
+ Comment if you take any!

the rest are HERE @

After Chuck proposed to Blair last night at central park and she turned him down, Chuck has done nothing but lay in his bed all day. He’s confused because him and Blair made a promise to each other to wait for each other until they graduated from college. But once the moment finally arrived, Blair turned a 180 and left Chuck to weep in his sorrows alone. What Chuck doesn’t know is that Blair has been crushing on Serena’s husband Steven. Steven occasionally flirts with Blair but Blair is determined to take down Serena’s relationship, expose her darkest secrets on Gossip Girl, and dump Chuck once and for all.

“Darota, give me everything you have on Steven. I want to know everything about him to show him that I know him better than his own wife does. In the meantime, I’m going out,” Blair exclaims to her maid.

Blair puts on her cashmere gloves and Tory Burch tote and heads out to meet at Serena’s new apartment. As soon as the elevator reaches the penthouse suite floor, Blair is greeted by Steven and her heart melts. Although she’s dying inside, she keeps herself composed.

“Steven, I hope you’ll be coming to Thanksgiving dinner at my house tomorrow. I saved you a seat right next to me,” Blair says coolly.

“Why thank you Blair. I certainly feel honored,” Steven replies with a grin.

Before going to Serena’s room, Blair plants small, hidden cameras into the apartment to keep an eye on Serena and Steven 24/7. She hides one on top of the refrigerator, by the television in the living room, and as soon as she enters the bedroom, she hides it in the lamp.

Serena enters and her blonde hair is gorgeous as ever. Blair cringes and puts on a fake smile. “Serena, great to see you! I have so much to tell you about Chuck.”

“What is it this time B,” Serena says rolling her eyes.

After gossiping for 40 minutes, Blair says her goodbyes and Serena gives her a last piece of friendly advice. “Blair, you two are perfect together. Don’t let him go just because you don’t feel a spark right now. You two have had a spark since high school and are meant to be together.”

Blair nods and zooms out of Serena’s room. As soon as she gets out of the elevator and starts walking around the Upper East Side, her phone keeps buzzing from calls and texts from Chuck. Indifferent to the situation, Blair decides to throw her phone into the trash, proving that she is ready to move on from the drama with Chuck and ready to become the new Gossip Girl behind Serena and Steven’s relationship. 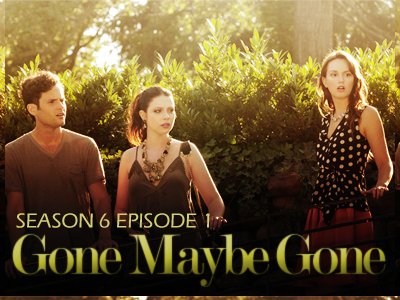 In the sixth-season opener, Blair and Chuck part ways after making each other a promise. Meanwhile, Georgina assists Dan with his tell-all book; Nate reignites his battle with Gossip Girl; and the gang rallies together to locate a missing Serena.

1 episode down, just 9 more to go in the last season!
Collapse